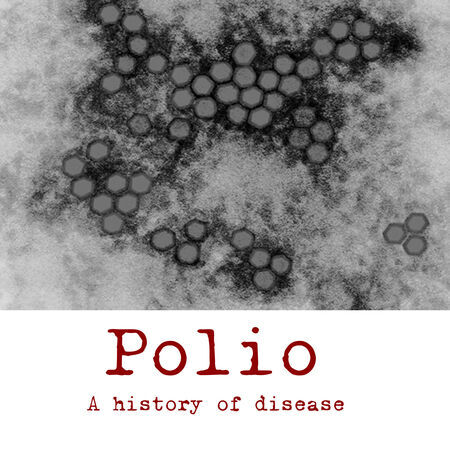 Poliomyelitis (Polio) is an infectious, disabling and life-threatening disease caused by the poliovirus. Only people who experience paralysis due to the paralytic infection are considered to have the disease. The polio virus only infects humans. It is mostly contracted by children. It spreads from person to person and can infect a person’s brain and spinal cord, causing a lack of movement in the body. Polio damaged the nerves that controlled the muscles around the lungs and can ultimately cause death by immobilizing the patient’s breathing muscles.

About 1 out of 4 people with polio will have flu-like symptoms such as sore throat, fever, fatigue, nausea, headache, and stomach pain. People infected with the polio virus can also feel pins and needles in the legs. These symptoms usually last 2 to 5 days, then go away on their own. One out of 25 people can get Meningitis which is an infection that covers the spinal cord and or brain. One out of 200 people with poliovirus will not be able to move body parts.

How is it transmitted?

Poliovirus is transmitted through droplets from an infected person’s sneeze or cough. The virus enters through the mouth. It is also transmitted when a person touches an object with feces on it and then touches their mouth. It can live in an infected person’s feces for many weeks. The feces can contaminate food and water in unsanitary conditions. Polio has infected children after playing in the dirty water of a ravine. An infected person may spread the virus to others immediately before and up to two weeks after symptoms appear.
The vaccine for polio and how it was distributed
In 1955 Connaught Laboratories in Toronto developed the Salk vaccine for polio. In 1962, an oral vaccine called Sabin brought polio under control in the early 1970s. But large outbreaks continued around the world.
There are two types of vaccine that can prevent polio: Inactivated poliovirus vaccine (IPV) and oral poliovirus vaccine (OPV). IPV is given as an injection in the leg or arm, depending on the patient’s age. Since 2000, only the United States has used IPV. OPV is still used for children and newborns. Since 1961, two billion children have been immunized against polio globally using OPV.
Polio vaccine protects children by preparing their bodies to fight the poliovirus. Almost all children (99 out of a 100) who get all the recommended doses of the inactivated polio vaccine will be protected from polio. The CDC recommends that children get four doses of polio vaccine.
It is possible to get a vaccine-derived polio virus (VDPV). A VDPV is a very rare strain of poliovirus, genetically changed from the original strain contained in oral polio vaccine. It can happen in areas that are not receiving adequate immunization and lack access to adequate sanitation and hygiene facilities.

Vaccines are given to protect a person from getting polio and prevent the spread of the virus. In 1988, the Forty-first World Health Assembly adopted a resolution for the worldwide eradication of polio. The World Health Organization (WHO) launched a Global Polio Eradication Initiative which was a global vaccination campaign to eradicate the disease. National governments, the WHO, Rotary International, the US Centers for Disease Control and Prevention (CDC),UNICEF, the Bill & Melinda Gates Foundation, and Gavi (the Vaccine Alliance) worked to make vaccines more accessible. Since then the number of polio cases has fallen by over 99%. The efforts of the WHO, governments and charities led to saving more than 18 million people from being paralysed. An estimated 1.5 million childhood deaths have been prevented.
In 1994, the WHO regions of the Americas was certified polio-free. In 2000, the WHO region of the Western Pacific was certified as polio free. In June 2002, the WHO region of Europe was certified as polio free. On March 27, 2014 the WHO region of South-East Asia was certified as polio-free. More than 80% of the world’s population lives in certified polio-free regions. Despite this progress, poliovirus is still a threat. It only takes one traveler with polio to bring the disease into Canada. The best way to keep countries polio-free is to use vaccination.

Since the creation of the “Global Polio Eradication Initiative,” founded in 1988, polio cases have decreased. The United States has been polio-free since 1979. In 1988 there was an estimated 350,000 cases of polio in 125 countries. In 2016, there were only 42 cases of polio in the world. By 2018, there were only 33 reported cases.  As of 2021 the virus is present in only three countries (Afghanistan, Pakistan and Malawi).
There are 3 strains of wild poliovirus (type 1, type 2, and type 3). Wild poliovirus type 2 was eradicated in 1999 and no case of wild poliovirus type 3 has been found since the last reported case in Nigeria in November 2012.

Who did the illness attack?

Poliovirus usually affects children under 5 years of age who are unvaccinated or under-vaccinated. The virus can also affect adolescents and adults.

In 1910, the first reported case of polio in Canada was in Hamilton, Ontario. A young girl became ill with the disease and died while in hospital. The virus soon spread throughout Ontario and into the rest of Canada.
In 1937 almost 4,000 cases were reported in Canada. Ontario was hardest hit with 2,546 cases and 119 deaths reported that year. Public health departments in Canada quarantined the sick, closed schools, theatres and restricted children from travelling. At this time, there was only one mechanical respirator or iron lung that existed in all of Canada. The iron lung created a vacuum around their body, with only their head showing. A device called a bellow sucked air in and out, forcing the chest up and down to help them breathe. When a boy was admitted to Toronto’s Hospital for Sick Children that year with breathing problems, doctors and engineers saved the boy’s life by building a wooden iron lung-device. They used plywood and an experimental respirator that had been created to treat premature infants. Over the next six weeks, hospital workers constructed an additional twenty-seven iron lungs in the hospital’s basement and the Royal Canadian Air Force flew and brought iron lungs to in-need communities. One hospital in Winnipeg had 90 mechanical respirators.
Polio cases declined in Canada during the Second World War, but they increased after the war. Typically, the polio virus came in waves every summer. In 1953, there was almost 9000 cases and 500 deaths due to polio.
In 1955 a vaccine was developed and distributed. In 1962 an oral vaccine helped control the spread of polio, but Canada was not certified polio-free until 1994.

Polio was in Canada since 1910, but British Columbia had few polio cases until 1927. In B.C. the main strategy to combat the polio epidemic was to sanction the collection of convalescent serum. After 1927, British Columbia was hit by more polio epidemics that reappeared every summer and spread eastward.
British Columbia adopted an OPV schedule in 1962. This meant that the vaccine was given four times spanning the ages of a 2- month-old baby to the age of 6.
The last outbreak of wild polio in Canada was caused by an imported, unimmunized case from the Netherlands in 1978. It spread into Ontario, Alberta, and British Columbia. The result was a total of 9 polio cases.

Our research did not produce any information on polio victims in Pitt Meadows. However, as polio was a common occurrence among children in Canadian history it is safe to believe that there were people who had polio in Pitt Meadows, but we do not have any records of them.