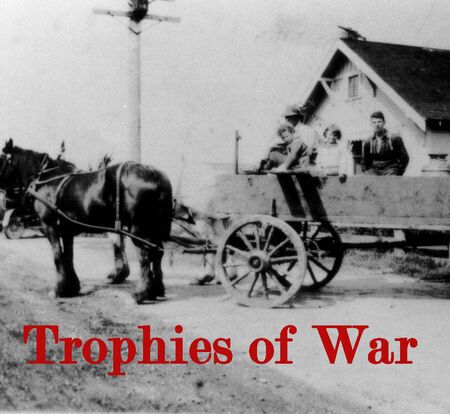 Unlike Geraldo Rivera when he opened Al Capone’s vault, when the City of Pitt Meadows went digging in their old Heritage Hall vault last summer, they and the Museum were not to be disappointed.  What was revealed is a treasure trove of archival material with at least one document dating back to the late 1880’s.
For Museum staff – especially the Curator who has been waiting more than 20 years to see what lurked within – it was like Christmas.  Ledgers, letters, ephemera and other miscellaneous documents and images have come to light and reveal information about the beginnings of this municipality and through the first decades of incorporation.
Over the course of the fall and early winter of 2020, and with Covid restrictions vastly reducing the time  Museum staff were spending on programs and tours, we managed to organize and house the material and digitize the entire collection. The next step, likely this summer (2021),will be to produce a finding aid and write a blog posts based on some of the material, the first of these here today.
At the Museum, the story of German machine guns – “war trophies”-- given to the municipality by the dominion government, and placed atop the first Municipal Hall in 1929/1930 as a Halloween prank, is well known.  We have never doubted the authenticity of the story as it is documented in Edith McDermott’s 1967 Historical Story of Pitt Meadows, and we have an image in the collection that shows one of the guns clearly mounted on the building.  However, what we have never been able to establish is how the municipality came to have the weapons, or, what happened to them after the Hall burned to the ground in December of 1930.
Thanks to this new collection, the first of those questions has now been answered.  Contained in the records obtained last summer is the full – from the municipality’s original letter requesting the guns through the municipality’s letter acknowledging receipt and all the other paperwork in between – documentation of the guns including their assigned government numbers, 4783 and 822.
We now also know the process was incredibly quick with the municipality sending their request letter to the Director of War Trophies on the 13th of September 1920 and receiving a positive response from the Public Archives of Canada dated the 30th with shipment of the guns a day earlier on the 29th.  We still do not know their exact arrival date in Pitt Meadows, but we do know that Municipal Clerk William McDermott acknowledged receipt in writing to the Director of War Trophies on November 8th of that year.  After that, we think the trophies must have been stored in the Hall and gathering dust for almost a decade until that Halloween night when, according to the Historical Story book, Ted Herbert and William McDermott mounted at least one of them to the Hall’s roof while a small crowd cheered them on.  As for the question of what happened to the guns after the December 1930 fire, that information did not come out of the vault and continues to be a mystery.  A mystery we are still hoping to solve.
Leslie Norman, Curator
Pitt Meadows Museum and Archives

Following our May 12 blog post we had amazing feedback from Alexander Comber, a Military Archivist at Library and Archives Canada.  His email provides us with the fascinating background on how the War Trophies Commission functioned and how to better identifiy the guns the community received.  Read Alexander’s email below.

“A colleague sent your recent blog post to me, about the two machine guns awarded to Pitt Meadows by the War Trophies Commission (WTC). I really liked the collection of digitized records, including the very important document acknowledging the community had received the trophy.  Sir Arthur Doughty, the Dominion Archivist of Canada, was also the “Director of War Trophies”, and, for the WTC, handled most of the planning around the dispersal of the collection.  He had also served as an honourary Lt. Col. in the Canadian Expeditionary Force, responsible for beginning to acquire important archival records about Canada’s participation in the First World War.  While in England and France, he had become very interested in what to do about the large collection of enemy equipment, and especially guns, that had been captured in the great offensives, starting with Vimy Ridge, Apr. 1917.

Unsurprisingly, in Ottawa, at Library and Archives Canada, there is a reasonably detailed collection of records about the establishment and operations of the WTC.  Today it is in Record Group 37, the archival fonds for the National Archives/Public Archives of Canada.  One of the records that I first ordered, before I worked at LAC, but when I was an Assistant Historian at the Canadian War Museum, was located in RG37 D vol. 388:  the War Trophies Commission shipping ledger.  It is more interesting than it sounds, as it tracks shipping via railway, date of arrival of the trophy in the community, and also sometimes contains information about where (on the Western Front) the guns were captured, and by which units of the CEF.  I have included the page from the ledger for Pitt Meadows.  You can see the trophies arrived via CPR on 29 Sep. 1920.  MG 4788 is reputed to have been captured by the 44th Canadian Infantry Battalion, but it does not give the date of the action.  I also have attached an additional list that inventoried the trophies, mostly in storage in Toronto, that includes some of the same info.  However, for the other MG, 822, it also notes that this gun was captured by the 45th Canadian Infantry Battalion (no date).  Generally, the idea was to disperse trophies back to communities in the various battalions’ areas of recruitment, so that the communities would get “their” trophies.  The 44th and the 45th BN both seem to have been Manitoba units, so I am not sure about that…but at a certain point the dispersal became more general, to ensure communities got a trophy.  When there isn’t specific info about the type of MG, it normally means it was a Spandau MG08, a heavy MG on a “sledge” style mounting.  There were also many examples of the lighter MG08/15.  Trophies normally wound up at the (usually newly-constructed) cenotaph, or some other civic memorial, town hall, library, courthouse.  By the 1930s they were not usually being well-cared for, so when the SWW began, most communities wanted to get rid of them, using the “salvage drives” to cash them in for funds to contribute to the War Effort.  AS an FYI there are no usage restrictions on those documents, so long as you acknowledge the archival source: LAC, RG37 D vol. 388.

There are also a separate series of records for the War Trophies Disposal Board, a Second World War entity that mostly authorized the disposal, for scrap metal, of large parts of the collection of War Trophies.  I feel it would not be very likely that Pitt Meadows MGs would be traced by this, though.  It does better to track the field guns and trench mortars, but the Canadian Government had brought back a very large amount of machine guns.  I have also used our FWW CEF War Diaries collection to sometimes find info or reports that list guns captured by individual battalions. These are available digitized on our website but can be challenging to consult. The absence of any specific details of the date of capture make it a more painful search in the appendices of multiple months of diaries (1917-04 to 1918-11)

As a personal project, years ago, I put together some information and data-entered some of this ledger, but mostly the tracking of Machine Guns was beyond the scope of the project! Anyways there is more context here.

I hope you can make use of some of this information, and I hope you are able to locate one or both of those trophies!”

Letter from the Government 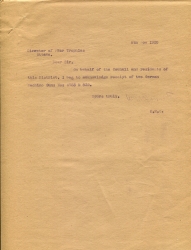 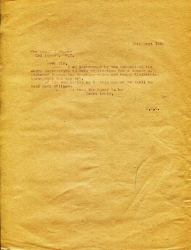 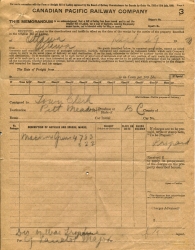 Description of the Machine Guns 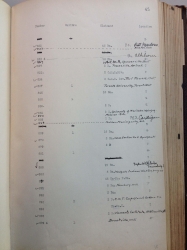