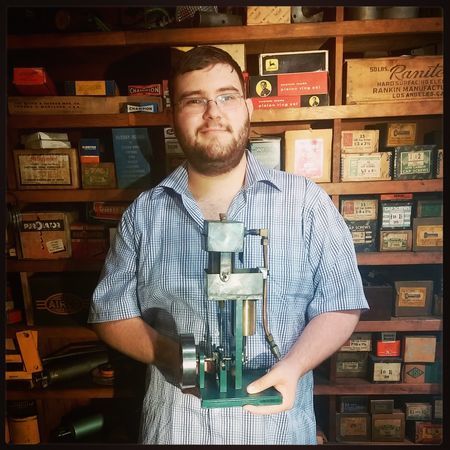 While working at the Pitt Meadows Museum and Archives this past summer my project has been the supervision of its Hoffmann & Son site and the accessioning of various pieces of the Hoffmann collection. This involved identifying objects, their purpose, and manufacturer while also measuring dimensions and photographing the piece.

With this mandate I spent the summer working my way from the office of the Hoffman & Son site to its displays in the small lathe room. It was in the small lathe room that I spent the greatest amount of time this summer accessioning all the various tools and objects that belonged to Hans Hoffmann and that he would’ve used in his day-to-day activities and on many of his projects.

In one display case you’ll find the two Sterling engines built by Mr. Hoffmann as one of his many projects that showed the amazing degree of skill he exercised in his work. Moving on from there was the short grey cabinet in whose display you’ll find tools dating to Hans Hoffmann’s childhood and the sort of tools he would’ve commonly had to use in his career as a machinist.

In the drawers of this cabinet is a plethora of the many other tools Hans Hoffmann used in the operation of his lathe, shaper, and drill press. In the trough of the lathe is an assortment of the tools used commonly by Hans Hoffmann in his lathe work.

When I was not examining Hoffmann’s tools or snapping a photo of them, I was touring visitors from the community and beyond around the Hoffmann & Son site. As a long time resident of the Pitt Meadows & Maple Ridge area I was overjoyed to be able to share some of the area’s history and my enthusiasm for it with so many different people over the course of this summer. I would like to thank the Pitt Meadows Museum and Archives and the Young Canada Works program for providing me with this stupendous opportunity to explore the history of Hans Hoffmann and Pitt Meadows. I’ve greatly enjoyed my summer working with the museum and plan on visiting soon in the future!

Thanks for the great memories!

Hi everyone, I’d like to start off with saying that this summer at the Pitt Meadows Museum and Archives has been awesome! One of the main reasons it has been so great is because of the amazing people that have come to the museum, either for the Heritage Thursday’s programs or for visiting and viewing the museum. All of the stories and input have really added to the repertoire of learning that’s occurred this summer. I am very appreciative and thankful to you all. Leading up the Heritage Thursday’s programs, I spent my time researching the decades and finding popular activities of each decade.

Using my research, I developed and created the Heritage Thursday’s programs as well as the presentations for the educational component of each session. It was never a dull moment during our Heritage Thursday’s program. From July 10th to August 21st, children between the ages of 5-10 were rediscovering the previous decades (specifically the 1980’s to the 1920’s) through arts and crafts, games and songs.

One of the most popular programs this summer was the Theatrical 30’s program where we created a silent black and white film! “Dude, where’s my baby?” can be found on YouTube and our Pitt Meadows Museum and Archives Facebook page.

A huge thanks goes out to Jen Chernecki, Jess Rhodes, Leslie Norman, Sam Giles and all the volunteers that helped make the Heritage Thursday’s programs a success. I’d also like to thank the Government of Canada HRSDC and the Pitt Meadows Centennial Committee for funding to make the programs possible. I look forward to starting my next adventure: year three of the Therapeutic Recreation degree program at Douglas College.