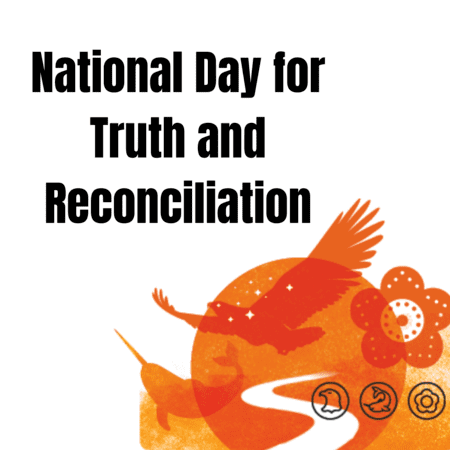 National Day for Truth and Reconciliation

History of Residential Schools in Canada

Residential schools can be found in Canada as early as the 1830’s, with an Anglican Church establishing a school in Ontario. There were schools built prior to this point for first nations children, but they don’t have the distinction of being a residential school. Every single province and territory (with the exception of New Brunswick) had federally funded, church-run residential schools. First Nations, Inuit and Metis children were forcibly removed from their homes and families and placed in these “schools”. The thought was by forcing them to abandon their tradition, cultural practice, and languages, they could assimilate into white settler society (Christian and Euro-Canadian).
Federal Residential schools began as early as 1883. The point for the government was to solve the “Indian Question” by forcing them to assimilate into white settler culture. Canada is not alone with the use of these schools: Great Britain, Ireland, United States, South African, Australia and New Zealand all had their own version of the school to impose their beliefs and cultures onto First Nations. The “education” these children received was subpar to the education of their peers. The schools were underfunded, insufficient and mismanaged leading to widespread abuse and death.
Children were forcibly removed from their homes and families and separated for an extended period. They were not allowed to participate in aspects of their culture or speak their language and would be harshly punished if they went against the rules. This created rifts in these cultures, and disrupted families for generations. The effects of the school system are still there today: survivors of the system still have the scars (emotional and physical) that they must deal with daily, the missing generation of children, the gaps of knowledge that weren’t passed down because the children weren’t there, just to name a few of the problems. It is estimated that 150,000 children attended these schools and it is estimated that 6,000 children died at the schools, although this record is incomplete. In total there were over 130 residential schools in operation during the life of the program, with 1931 having the most operating at 80.
The last residential school in Canada closed in 1996.

What has happened since the closure?

In 2005, the federal government established a 1.9 billion dollar compensation package to survivors of residential schools. In 2007, the federal government and the churches that operated the schools agreed to provide financial compensation to former students under the Residential Schools Settlement Agreement. On June 11th 2008, the Canadian government issued a formal apology in Parliament for the damages done by the system.  The Indian Residential School Survivors Society was formed in 1994, incorporated in 2002 to help provide support for survivors and communities as they continue their journey to healing. The National Residential School Survivors Society was incorporated in 2005. In 2020, two former residential schools – one in Nova Scotia and one in Manitoba – were designated National historic sites. This is the government recognizing the residential school system as an event of historical significance in Canada. In March 2022, Pope Francis formally apologized for the Catholic Church involvement in these schools.
The final report of the Truth and Reconciliation Commission (2015) outlined several “undeniable” conclusions about this system: the federal government failed to set clear goals and standards for education at the schools, the curriculum was an elementary curriculum (reflecting the belief that Indigenous people were intellectually inferior),government did not develop or implement a policy regarding teacher qualification, teaching staff was underqualified overworked and poorly paid, the curriculum was basic and irrelevant to students needs, and students left school without the skills they needed to succeed.
In May of 2021 a survey of the grounds at the former Kamloops Indian Residential School uncovered the remains of 215 children. In 2008 the Truth and Reconciliation Commission was told that only 50 deaths had occurred at that school. The process to finding these children has been extremely difficult, this is due to the fact of the sensitive nature of the discovery,  the limitations of access to the sites and the cost of discovery. Since that discovery there have been over a thousand children found at former residential schools. It is believed that these discoveries will be the first of many.

What can I do to support as a settler Canadian?

Here are some of the things you can do in recognition of Truth and Reconciliation as a white settler. Acknowledge the day even if it is discomforting to you. These type of conversations can be uncomfortable as you have to recognize your own privilege and the fact that we have those privileges because of our past. Wear an orange t-shirt to demonstrate your own acknowledgement of the day. Make sure that it is sourced from an organization that is either Indigenous, or the funds benefit Indigenous groups or people. Attend a Truth and Reconciliation Event and show your support. Find ways to be an ally to the Indigenous groups whose territory you live on. Make a donation to an Indigenous group to show your support.
Some resources you might want to check out:
The Truth and Reconciliation has a list of Calls to Action that you can read here
You can watch a timeline of Residential Schools in Canada created by Historica Canada here
Indian Residential School Survivors Society
Katzie First Nation
Pitt Meadows never had a residential school the closest site was in Mission.
We acknowledge that Pitt Meadows is located on the traditional territory of Katzie First Nation.