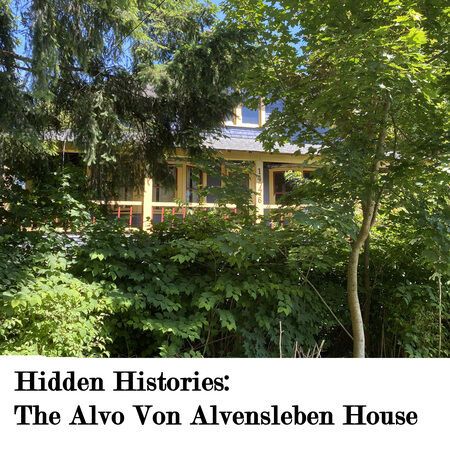 On your way to Pitt Lake, you are likely to drive north on Harris, then right on McNeil roads.
As you do this, have you ever noticed a house hidden behind the trees?
Vancouver promoter and investor Alvo von Alvensleben built this home in North Pitt Meadows (1912). The house he built, a craftsman beauty at the southeast corner of Harris and McNeil roads, is on the Pitt Meadows Heritage Register (2006). This house has a lot of Edwardian-era features, with a wraparound verandah and craftsman style details.
Alvo von Alvensleben was the son of a Prussian count born July 25th, 1879. He embarked on travels around the world and wound up in Vancouver in 1904. He was highly successful in real estate ventures, and this made him wealthy. He was one of Vancouver’s most influential promoters and he brought millions of dollars of German investment capital into the province.
After several odd jobs such as a farmhand, a night watchman, hunter, and fisherman proved fruitless, Alvensleben reached out to his family’s powerful friends to help him establish “Alvensleben Finance and General Investment Co., one of the first stock trading firms in Vancouver. Once Alvensleben gathered enough investors, he was able to make enough money to pursue the extraction and sale of natural resources that he had ventured to Canada for; mining minerals and coal, logging lumber, and drilling for oil.
With the even greater amount of money he was making, Alvensleben was able to finance the construction of the Dominion Building in Vancouver, and a residence for his family that is now known as the Crofton house in Kerrisdale. Alvensleben also built the luxurious “Wigwam Inn” in Indian Arm to host his rich German contacts when they came to visit Canada.
By 1913 due to the economic crash, he was nearly bankrupt and had wiped out much of his fortune. Unfortunately during the first World War, Alvensleben was visiting Berlin and was unable to return to Canada once the war broke out. He was even accused of being a German spy, and because of his given status as an “enemy” so he would never return to Canada. During the war, the government confiscated his property, claimed by the Canadian Office of the Custodian of Enemy Property. He relocated to Seattle where he was interned in 1917 because of his german heritage, and was released after 3 years. He returned to Seattle to pursue real estate and stock trading, but without his previously established success or his rich German contacts to support him, Alvensleben never achieved a similar level of opulence ever again.
Alvensleben would die in Seattle in 1965 having never returned to Canada and having left behind a large legacy of beautiful buildings and promise. Although Alvensleben never occupied this house, it was loved and appreciated by the many families that lived in its walls including the Kinchler, Ashley and Veltin families.
Unfortunately, many years of wear and tear have caused this once beautiful home to fall into disrepair. Luckily, the developers allowed Museum Staff to remove several items of historical significance from the home (including two stained glass windows) and take photographs which can be viewed below. 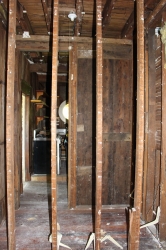 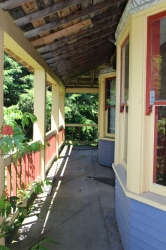 Alvo Von Alvensleben House exterior from the side 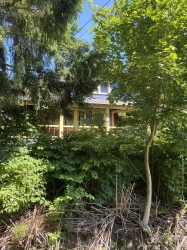