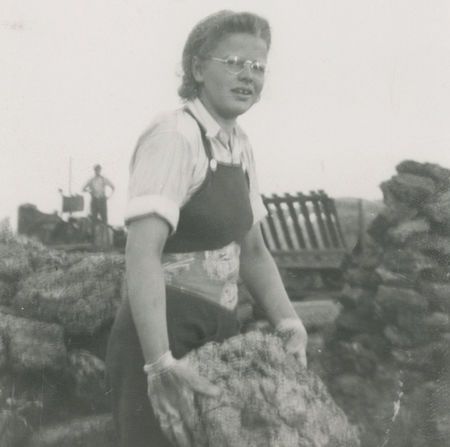 Peat is living and partially decomposed organic matter (consisting mostly of decayed brown mosses, plants, and other semi-aquatic plant remains). Peat is formed in waterlogged areas as the vegetation decays, and because of this it contains up to 95% of water by weight. Dried Peat has traditionally been used as water filtration, absorbent material, and fuel.

In order to harvest peat, the bog must be drained, using a network of drainage ditches. The ditches are deepened as the peat fully forms. After several years, the bog is ready for peat removal (as it has dried out considerably).

The following is from Edith McDermotts Historical Story of Pitt Meadows:

“Pioneer Peat, established June 29, 1919 by Moncreiff and Vistaunet, was the first industry in Pitt Meadows. They built a large factory 40’x60’ by 40’ high into which a peat dryer was built which wasn’t very effective as it cost as much as a bale of peat was worth to dry it. So, before Christmas of 1930 the firm closed and the buildings lay idle until 1933. In March of 1933 Premier Peat Products (having been renamed) again opened the factory but by the end of three months it was again closed.

In February of 1934 Alouette Peat Products which had previously operated on Harris Road North, bought the land and started up business with a Mr. Arnett as manager, who continued until May 1940 when he resigned as they were operating at a loss. In July of 1940 the factory, sheds and officed burned but all the records were saved. Only the two houses remained. The owners, Nootbaar and Taylor, the latter J.H. Taylor of the Taylor Milling Company of Los Angeles, were able after some difficulty to collect the full insurance and so were in business again.

During the war from 1942 on, peat from this factory was shipped to Las Vegas, Nevada, for use in the war effort. In time Las Vegas discovered that water could do the same job they were using peat for, so that market was lost. Peat sales were very slow during the war.

Each year between 1934-1939 as many as 150 people worked at the harvesting of the peat. Fifty to 60 people worked regularly at the digging of peat, as piece work, McMyn Truck Line hauling from Alouette Peat during the year. This helped many during depression years. In 1948, because of the flood, no peat was dug but in 1949 work continued as usual. It was customary to dig enough peat to make 100,000 bales which was enough for the year’s sales.

In 1949 the firm sold to Coast Peat of Byrnes Road, South Burnaby, as their plant had been destroyed by fire and they did not wish to rebuild there.

Before World War II, most of the sphagnum moss peat used in North America came from Europe. During the war, traditional sources of peat were interrupted and efforts to develop local sources of peat triggered the modern era of peat production in Canada, mainly in British Columbia, Québec and New Brunswick. During the Second World War, peat was used to pack munitions and in the construction of firebombs, this made peat vital to the war effort. Following the war, peat would return to its agriculture uses."

Thank you to Theresa and Roy for the photographs that are featured below. If you have any memories of the Peat Plant, we encourage you to add them to our Community map (Click here)

Where Peat is unloaded near the shed at the Alouette Peat Farm c.1940s 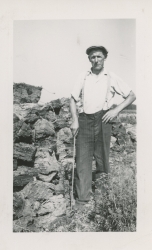 A man working at the Alouette Peat Farm c.1940s

A Man working at the Alouette Peat Farm c.1940s

Conveyor belt from the fields at the Alouette Peat Farm c. 1940s 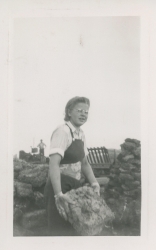 The unloading area of the Alouette Peat Farm c.1940s