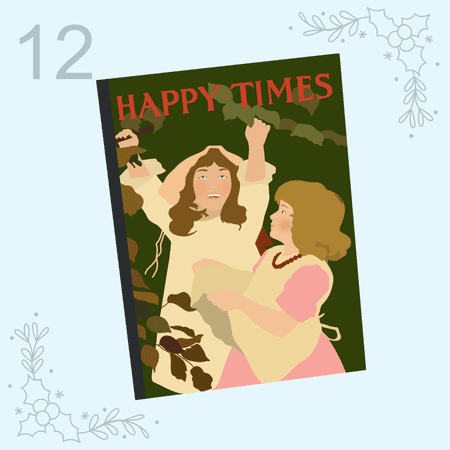 On the twelfth day of Christmas my Museum showed to me Happy Times as its almost a New Year!
We have all done it, it is the last day of 2020. Time to celebrate these happy times! (Although we acknowledge that it is not quite the new year for others, like those who celebrate Chinese New Year).
There have been many attempts at time keeping in the past, with ancient civilizations utilizing the lunar cycle to determine dates and the changing of the seasons. Most think of Julius Caesar when we think of the birth of the first calendar that resembles what we have today. The first calendar in Rome was created by Romulus (the founder of Rome) in the 8th century B.C.E., however the dates were off on this calendar causing it to fall out of sync with the sun. Julius Caesar proposed the Julian Calendar in 46 B.C.E. which reformed the Roman Calendar. This calendar introduced us to leap years, three years of 365 days and one year of 366. Most nations that were a part of or closely tied to Rome would have utilized this calendar. It was not until 1582 C.E. that the Gregorian Calendar is used, and that is now the Calendar most used across the globe.
Caesar also moved the celebration of New Years Day to January 1st, to honor Janus (Januarys namesake) who was the Roman god of beginnings. The celebrations for New Years in Ancient Rome were the time that people would give gifts, decorate their homes, and attend parties. Early Christian leaders wanted to rebrand the celebration and attempted to move New Years traditions to other days that were more significant in the church (like how we now give gifts on Christmas instead of New Years). In 567 the Council of Tours abolished New Years as the beginning of the year, and instead had the day on December 25th (as it was to attempt to tie in more in Christian events). It was when the Gregorian Calendar was introduced that January 1st returned to its glory of being the first day of the New Year. Today people still celebrate the New Year on December 31st/January 1st.
Our merriment and excitement start in the early evening on December 31st as we all sit in wait counting down until midnight. In North America, our traditions are eating, partying, and enjoying the company of friends and family as well all countdown to midnight (Although, sadly, this year is going to look a lot different). Some will sing songs such as “Auld Lang Syne” and watch fireworks. We also make our resolutions in hopes that we can keep them in the New Year, which is a tradition started in Ancient Babylonia when people would make promises to earn favour with the gods. Other countries have different traditions. In Spain, they eat a dozen grapes just before midnight to symbolize their hopes for the coming year with each grape representing a month. In Austria, Cuba, Hungary, and Portugal they eat pork as pigs represent progress and prosperity which is something that one would want in the New Year. In Greece, Mexico, and the Netherlands people eat circular cakes to show the year coming full circle.
What is your New Years Traditions? Happy New Year!