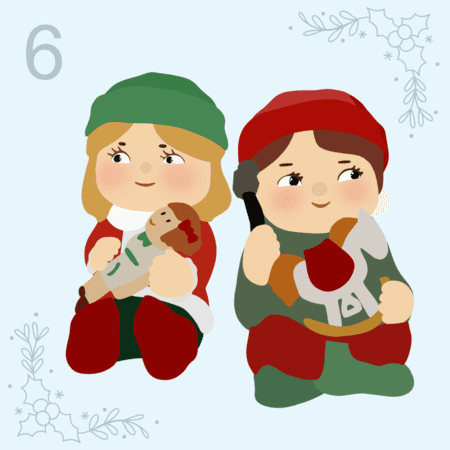 On the sixth day of Christmas my Museum showed to me a few cute little elves!
Historically, elves have been around for thousands of years and across the world (they are part of most cultures lore). One could trace the roots of Christmas elves to any of these old stories.
During Christmas, the image of elves that we have is a playful helper to Santa Claus. Making toys at the North pole in their little red and green uniforms and being generally helpful. That is a more modern rendition of elves introduced in literature by Louisa May Alcott in 1856 (in her unpublished novel Christmas Elves).
Nordic folklore refers to elves (or traditionally what we classify as elves today) as nisse, tomte, tometnisse, or tonttu. These creatures are associated with the winter solstice and Christmas season. They are described as being short, having a long white beard, and wearing a conical hat in a bright colour. Traditionally, these creatures live in houses and barns on the homestead acting as a guardian of the family, however they are prone to anger if you offend them and will play tricks or harm you if provoked. During modern times, the nisse/tomte appears on Christmas Eve bringing presents to people’s doorsteps riding either a Yule Goat (Julbocken) or a pig.
In the “Night Before Christmas” Santa is even referred to as a “Jolly old elf”, to be fair though he was doing what for centuries elves had been doing, giving gifts. Some believe that Santa in the “Night Before Christmas” is what solidified the idea of elves being linked to being Santas helpers.
Whatever the History may be, elves have got to be one of the hardest working helpers of the North Pole (although that honour could go to the reindeer who must haul all those toys).
What is your favourite elf mythology?
Click here for Day seven!