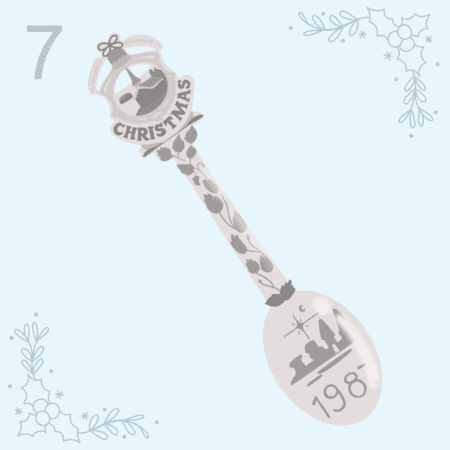 On the seventh day of Christmas my Museum showed to me a silver coloured spoon!
With cutlery one starts thinking about the delicious Christmas and Holiday meals they are going to eat this holiday season. Christmas in the northern hemisphere where it is wintertime, so during these celebrations we tend to serve items hot, and when we season its with spices that have warming qualities (nutmeg, cinnamon, ginger for example). It’s also a meal that honestly is more about the family and friends that are gathered rather than the food that’s placed in front of you.
In Canada, traditionally we have a dinner similar to Britain. Turkey, stuffing, mashed potatoes, cranberry sauce, gravy, and vegetables often line our tables. Obviously since Canada is so ethnically diverse, we see many variations on this tradition.
The turkey is a relatively new tradition. Originally geese were the ones eaten at Christmas time as they laid eggs seasonally and could be fattened up for the holiday meal. Legend has it that King Henry VIII ate the first turkey on Christmas Day, but it was in Victorian times that turkey became the more popular choice for Christmas. By the mid-twentieth century Turkey had overtaken the goose in popularity, that could also be thanks to Queen Victoria who during her reign had enjoyed turkey over goose and others followed suit.
Generally, the Christmas meal is one that is enjoyed by all members of society. Banquets and meals for the poor and in need happen during the holidays in far greater numbers than during the rest of the year. If you want you can always donate to the foodbank to help those in need in Pitt Meadows, visit the Friends in need website (http://www.friendsneedfood.com/) or the Maple Ridge-Pitt Meadows Christmas Hamper society (http://www.mrpmchristmashamper.org) to donate. The City is also accepting donations at the Family Rec Centre until December 17th. Grace church accepts donations on Tuesdays and Wednesdays between 9am and noon.
What is your favourite part of the Christmas meal?
Click here for Day eight!