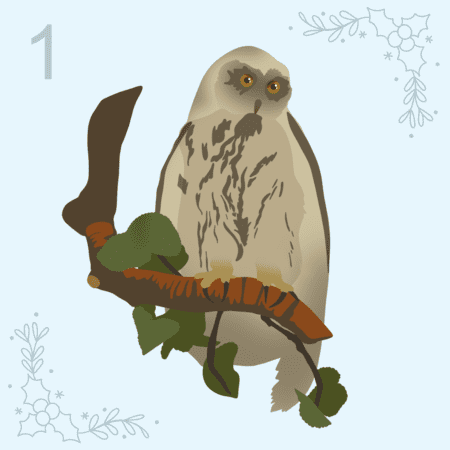 12 Days of Christmas - Day One

On the first day of Christmas my Museum showed to me an owl in an oak tree!
Not quite a partridge in a pear tree, but this little owl is a bird we had to share.
In Christianity, the 12 days of Christmas began on December 25th with the birth of Jesus and ended on January 5th with the coming of the Three Wise Men.
The song “12 days of Christmas” first appeared in a childrens book in 1780 called Mirth With-out Mischief, however some historians believe that the song has French origins. The type of poem is known as “cumulative verse” where each new sentence adds onto previous sentences, leading to a longer poem. The song was only put to music in 1909 by Frederic Austin who based it on a traditional folk song and brought in the prolonged verse of “Five golden rings”.
Although the version we all know now has a variety of innocent friendly items (like the pipers piping, and drummers drumming) previous versions had bears a -baiting or badgers baiting reflecting the time period that the lyrics were from (bear and badger baiting were common forms of entertainment). Other variations include changing “My true love sent to me” to “My true love gave to me”. Some versions change the pear tree to a Juniper tree. There are several similar songs to the 12 days of Christmas sung in other countries. In Scotland its called “The Yule Days” with 13 days of gifts sent to a kings lady, in the Faroe Islands there are 15 items given, in France they have a song called “Les Douze Mois” (The Twelve Months) about what a loved one gives to another. Often the song lyrics change based on where you are in the world.

Every year since 1984, the Christmas Price Index attempts to catalogue the cost of purchasing all the items on the list from the song. In 2019, the cost estimated to purchase all the items would be $38,993.59! What a pricey gift!

Do you have a favourite version of “12 days of Christmas”?

Thank you, Kaitlin Shocohian for drawing our 12 days of Christmas!