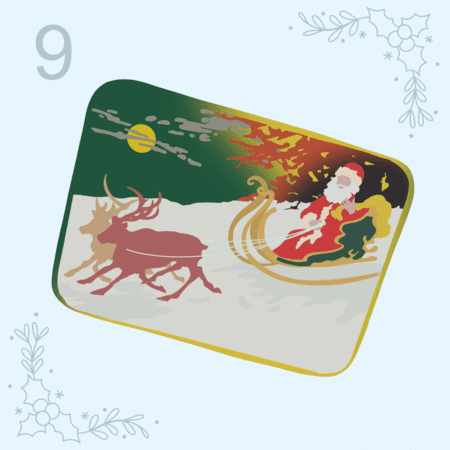 On the ninth day of Christmas my Museum showed to me, nine reindeer pulling a sleigh!
This tin features two of Santas ten reindeer, now which ones do you think are shown? We all know that Santa has a sleigh pulled by nine magical reindeer (Dasher, Dancer, Prancer, Vixen, Comet, Cupid, Donner, Blitzen, and Rudolph) but where did that start?
Reindeers historically have been mysterious creatures who live in northern parts of the world. Often these creatures were used for pulling sleds and sleighs and are still occasionally used for this purpose today (especially by the Sami people who are indigenous to the area known as Sampi and historically have a close association with Reindeer).
In 1821, William Gilley published a booklet titled “A New Year’s Present” where an anonymous writer introduced Reindeer as Santa Claus’ helper. The line reads “Old Santeclaus with much delight, His reindeer drives this frosty night. O’er chimney tops, and tracks of snow, To bring his yearly gifts to you”. However, these reindeer still did not have a name and we still did not know how many there were. In 1823, a poem titled “A Visit from St. Nicholas” was published (more commonly known as “The Night Before Christmas”) where we learned of Santas eight flying reindeer. In that poem though we learn that originally Donner and Blitzen’s names were Dunder and Blixem, they were originally Dutch words for “thunder” and “lightning” later changed to German words with the same meaning.
Finally in 1949 we get Rudolph joining the Reindeer crew. Jonny Marks wrote “Rudolph the Red Nosed Reindeer” based off the story by Robert L. May. This addition also solidified the spelling of Donners name, who was originally known as Dunder.
Although many have sought to create new reindeer to help pull the sleigh, it is accepted that there are nine reindeer (Sorry Olive).
Do you have a favourite Reindeer?