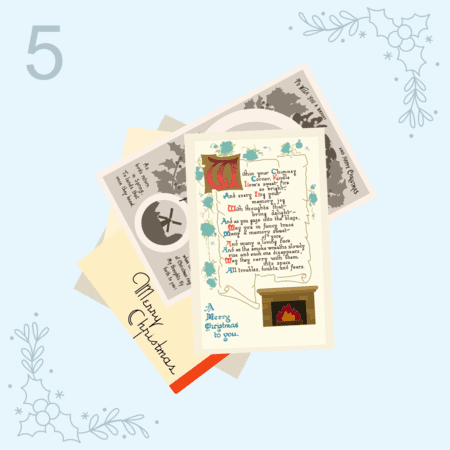 On the fifth day of Christmas my Museum showed to me five Christmas cards.

The first Christmas cards were sent in 1843 when an Englishman, Henry Cole, commissioned his friend and artist, John Horsley, to design a card for him. From Horsley’s original, Cole had 1,000 cards printed and had many of them hand tinted. He then used the English “penny post system” (he had helped establish in 1840) to mail the cards to friends and business associates. The remaining cards were then given to Joseph Cundall, a store owner and artist, who also hand tinted them and then sold them to eager customers. These cards are considered the first to be commercially marketed Christmas cards.

The process of printing, tinting, and mailing was expensive, and this kept the Christmas card tradition from catching on with the general public. Eventually, more efficient presses became available, allowing for mass production of cards including coloured cards. In 1870 the cost to post a card dropped to a half penny, and this, combined with the lower cost of mass-produced cards, allowed the average English celebrant to send these Christmas greetings.

As in England, early Christmas cards in North America were expensive to produce and mail and did not really catch on until printer Louis Prang began mass producing them around 1873. He held annual contests for the best Christmas card design and then he printed the winners, thereby bypassing the artist fees. By the 1880’s his business was booming with a printing process so good that he was able to replicate the original designs precisely and print up to 15 colours on a card. In 1915 John Hall and his two brothers established a new player in the market, Hallmark Cards, and they soon cornered the market on Christmas cards.

Popular early Christmas card themes were winter scenes with children, sleds, skaters, and nature. Many of these cards were so ornate they could only be given by hand, but most were the mass-produced variety. Annie Oakley is credited with sending the first personalized Christmas cards -- they featured an image of herself on their cover. As she was doing a show in Glasgow, Scotland at the time, she is dressed in a tartan on the cards. The year – 1891.

“Christmas Seals” on card envelopes to raise funds for charity go back to the early 1900s when the idea originated in Denmark. They were a huge success with over four million being sold in the first year, and the practice quickly spread to most of Scandinavia, then Europe, and then North America.

We have many Christmas cards in the Museum’s collection with a few dating to the early 20th century and most dating to the 1930’s through 1950’s.

Do you still send out Christmas cards?