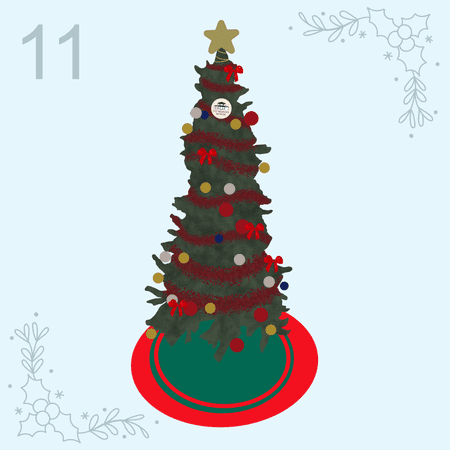 On the eleventh day of Christmas my Museum showed to me a fully decorated Christmas tree!
How the Christmas Tree came to be is a matter of some debate.  Two generally accepted stories exist, both from Germany.  The first dates to the 8th century and relates how St. Boniface travelled from England to convert the residents of Germany to Christianity.  In doing so, he replaced the pagan custom of sacrifices to Odin’s oak tree with that of a decorated fir tree.  The second, more popular, story tells how Christmas Trees started in Germany more than 450 years ago when Martin Luther placed a candle lit tree behind a nativity scene in his children’s nursery.  The candles appeared like stars above the nativity scene, their light shining down over the manger.  By the 17th century the Christmas tree could be found throughout Germany as well as in France and many other European countries.
The Christmas Tree was popularized in England after 1840 when Queen Victoria’s new German husband, Albert, brought the tradition to the Royal family.  On Christmas Eve in 1841 Prince Albert put up a tree for Victoria and their children who were photographed in front of it.  after the images appeared in papers in England and in North America, a new tradition was born.
German born settlers in North America continued their homeland tradition of a candle lit tree at Christmas many years before their British counterparts.  Their efforts were known as the “German Way of celebrating Christmas”.   Other decorations on early Christmas Trees included fruit, nuts, cones, cookies, and other homemade ornaments.  A little later, presents were placed on rather than under the tree.
In Canada, the Christmas Tree was introduced to the country about 175 years ago by a Halifax businessman, William Pryor when he brought a candle lit and tree decorated with glass ornaments, ribbons and cookies into his home in 1846.  The tree was a gift for Barbara, his German born wife.  The Pryor’s were an affluent family and the practice quickly caught on in their social circle and beyond.
Did you decorate your tree this year?