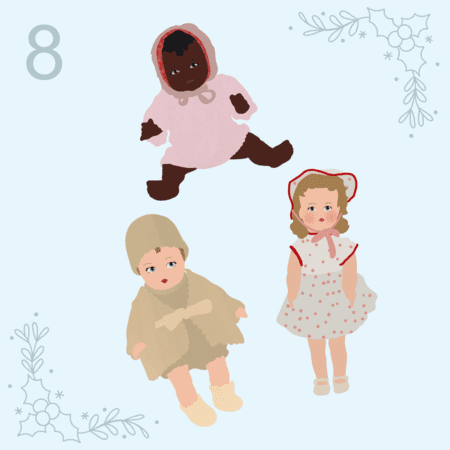 On the eighth day of Christmas my Museum showed to me eight dolls a playin’.
Machines took over the maids a milking job, so we replaced them with these dolls for our 12 days. With those eight sets of eyes staring at you, you might be wondering how gift giving became a Christmas tradition.
Historically, Christmas gifts can be rooted in paganism (like a lot of Christmas traditions). Pagans would give gifts at winter festivals, including Saturnalia which began on December 17th. It was a weeklong holiday that pagans would drink, and gift items to others. Once Christianity came in, it became important to try to eradicate old pagan beliefs and traditions. In the 4th century they rebranded Saturnalia into Christmas, borrowing rituals and traditions from the original festival including gift giving. Originally gifts started out as small trinkets, and handmade treats. Once Industrialization happened though, mass manufacturing of items like dolls and toys started to happen replacing the handmade gifts of the past.
Santa Claus is based off St. Nicholas of Myra a monk who handed out bags of money and items to the poor. In 1823, Santa Claus was introduced to the United States and Canada by the poem “Twas the night before Christmas”. By the 1930s Coca Cola solidified his image in a red suit, and he became THE guy at Christmas time if you wanted to get gifts (there are other benevolent gift givers across the world, but in Canada we recognize Santa Claus). Originally gift giving during Christmas time was to the poor, lower classes would go around and receive gifts and trinkets from those who could afford it. Eventually this shifted to gift giving being for children, and was solidified with Santa Claus.
Do you remember your favourite gift Santa gave you as a child?
Click here for Day nine!