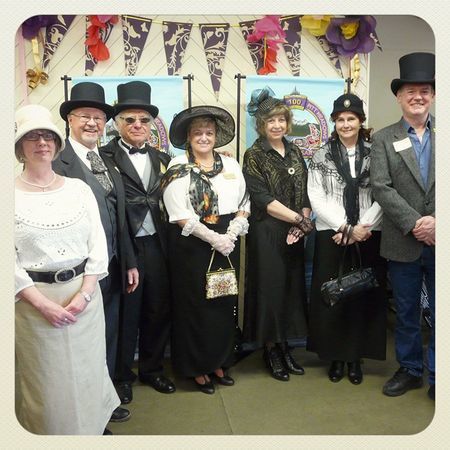 (As extracted from our Looking Back column for the Maple Ridge News December 9, 2014)

On Friday December 5th Pitt Meadows celebrated its last official event of the Centennial Year when the City and the Pitt Meadows Community Foundation hosted the annual Pitt Meadows Christmas event. As wet as it was, the evening was still very special.

Next week, on December 17th, the Christmas Train will visit Pitt Meadows for the very first time and will stop on Harris Road in front of the Museum to entertain residents for an hour from 8:30 on. The Museum will also throw open its doors for anyone who wants to catch a glimpse of our decorated building and a last view of the “Through a Century of Progress” exhibit before we close for the Christmas break.

This has been an amazing year with the City of Pitt Meadows and a variety of community groups, including the Museum, pulling together to make it a Centennial to remember.  Our Society’s Annual Heritage Tea in April kicked off the year with a record crowd and so many in the centennial spirit wearing 1914 era fashions.  So many of our visitors had not been back to Pitt Meadows in decades and were thrilled to reconnect with old school mates and neighbors.

We then moved quickly to the Heritage Fair in Spirit Square where the weather was phenomenal and the number of visitors almost overwhelming but the day was a resounding success.  On the same day the re-creation of the original first council meeting was hilarious and rounded out a perfect event, and the Centennial Gala a few days later finished up a superb incorporation week.  Pitt Meadows Day with resurrected May Pole dancing and a visit from the Lieutenant Governor was wonderful as were the Canada Day celebrations on July 1st.  The Seniors Country Fair and Remembrance Day with the unveiling of the banner project followed in the fall and the Great Pitt Meadows Heritage Hunt provided lots of fun leading up to its conclusion with the winner treated like royalty at the Christmas event.

The Museum and Archives has seen amazing support from present and past residents with hundreds (if not thousands) of photographs loaned for scanning and many other donations of objects and archival materials.

Will we be sad it is over?  Yes and no.  We will miss the excitement and the energy that was experienced at events and around the community all year but now we will have time to hunker down and work on the material that has arrived and to begin the planning for 2015 programs and exhibits.  Merry Christmas Pitt Meadows and a Very Happy end of our Centennial Year.

The Staff and Volunteers of the Pitt Meadows Museum